Having to pay a bribe for life-saving medicine and official documents like passports and driver’s licences would for many people seem unthinkable.

But it’s the reality for more than a quarter of African citizens, according to the results of a new survey into corruption on the continent.

Transparency International’s Global Corruption Barometer – Africa 2019 has found more than half of 47,000 citizens in the 35 countries surveyed believe their nation is becoming more corrupt – and that the government isn’t doing enough to tackle the problem.

More than one in four people who answered the survey had paid a bribe to access public services from healthcare to education in the previous year.

The report says: “Corruption is hindering Africa’s economic, political and social development… More than this, it affects the wellbeing of individuals, families and communities.”

Who does bribery impact?

Out of all the countries surveyed, people in the Democrat Republic of Congo are most affected, with 80% of public service users saying they’d paid a bribe in the past 12 months and 85% thinking corruption in the country is getting worse.

Mauritius was found to have one of the lowest bribery rates on the continent, with just 5% of those surveyed reporting having paid one in the previous year. Mauritians are reasonably optimistic about action being taken against corruption, with 55% believing this.

Within the countries surveyed, the poorest are hardest hit by corruption – with the cost of bribes meaning families have less money to pay for essentials like medicine, food and water.

Young people aged between 18 and 34 were also found to be more likely to pay bribes than those aged over 55.

And in some countries, including Kenya, Malawi, Nigeria and Uganda, two-thirds of people fear retaliation if they speak up about corruption, so it goes unreported.

Who’s the most corrupt? Almost half of the respondents believe “most or all people” in the police force are corrupt, followed by government officials and members of parliament as the least-trusted public figures.

At the other end of the scale, only 16% of people perceive religious leaders to be corrupt.

The police also earn the highest bribery rate across the continent, with 28% of people who have had dealings with them in the previous year having paid a bribe.

Schools, public clinics and health centres are also featured among services to whom people paid bribes.

These are the world's least – and most – corrupt countriesCorruption is costing the global economy $3.6 trillion dollars every yearIs this the way to finally beat corruption?

Corruption is not unique to Africa, however.

Transparency International’s Corruption Perceptions Index 2018, which ranked 180 countries and territories by their perceived levels of public sector corruption according to experts and businesspeople, found that two-thirds of countries scored below 50, with an average score of just 43. Zero means highly corrupt and a perfect score of 100 means the country is “very clean”.

In Europe, Hungary and Turkey’s CPI ratings have dropped over the past six years, and the index report notes: “These ratings reflect the deterioration of rule of law and democratic institutions, as well as a rapidly shrinking space for civil society and independent media, in those countries.”

In its 2018 report The Future of Trust and Integrity, the Partnering Against Corruption Initiative – a World Economic Forum cross-industry collaboration – said illicit financial flows cost developing countries $1.26 trillion each year.

They also have a substantial impact on developed economies: it is estimated the EU loses more than $159 billion each year to corruption.

But there’s hope for positive change. In Transparency International’s Africa survey, more than half (53%) of people are optimistic they could make a difference in the fight against corruption.

The NGO has also issued the recommendations shown in the chart below for how African governments could take a “holistic, systemic approach” to tackling corruption. 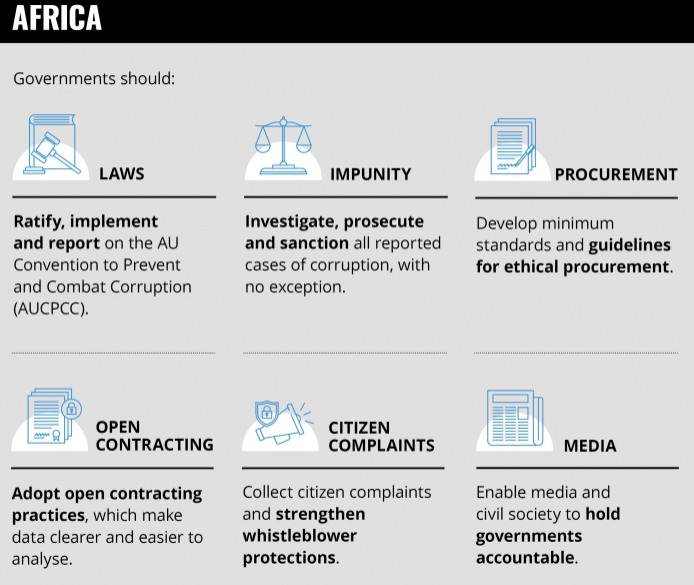 Meanwhile, business leaders around the world have been urged to implement international anti-corruption and anti-money laundering standards, and recommendations to governments include establishing public registers with information on the actual owners of private companies and trusts, as well as the enforcement of international bribery laws.

Collaborations like the Partnering Against Corruption Initiative will help in the global war on corruption, so that one day, the world might beat it altogether.

The views expressed in this article are those of the author alone and not the World Economic Forum or Geo Strategic Partners.

ACCORD highlights the importance of empowering local, grassroots peacebuilders at the 6th Gertrude S

Source: ACCORD via ReliefWeb By Molly Hamilton Virtual forum exploring leadership accountability for the implementation of the women, peace and security agenda during the COVID-19 pandemic and beyond.

Source: The Conversation Coronavirus sent shockwaves through the aviation industry. Liquidity-strapped airlines across the world have been sent into administration or part government ownership followi

Launching a new academic year under the cloud of COVID-19